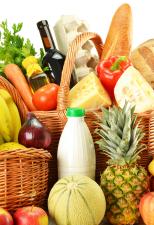 The History of the F. J. Mahar Service Stores - Park and Shop

The world of 1923 was very different than the world we know today. World War I had ended five years before, women in the United States had gained the right to vote only three years previously, and prohibition was in full force, with "rum-runners" making the headlines daily. Closed cars were just gaining popularity, and Babe Ruth was hitting home runs for the first place Yankees. In the summer of 1923, President Warren G. Harding toured the Alaskan Territory, but his term of office was cut short by a fatal illness, and the new President, Calvin Coolidge, was inaugurated in early August.

At this time in Olean, New York, Francis J. Mahar was starting out in the grocery business, working for the Market Basket Stores. Eager to venture out on his own, on his eighteenth birthday, October 13, 1923, he opened the first Service Store on Center Street in Olean. He continued working at Market Basket until 1936, when he decided to devote full time to his own business. By that time, in addition to the Center Street location, there was a Service Store at 1504 West State Street, another at 1020 North Union Street, and a fourth in Arcade. By 1942 the Center Street store had outgrown its building, and a new Boardmanville store was opened at the corner of Main and Front Streets.

As the stores expanded from small neighborhood groceries to modern, computerized supermarkets, the original name of Service Stores also grew to include Park and Shop. These words, originally added to advertise the availability of free parking, have come to be used interchangeably with the name Service Stores.

While Francis Mahar, Sr. was the founder and driving force behind the Service Stores, their growth and success would not have been possible without the help of many other people. His wife, Margaret, who began working for the Service Stores prior to her marriage, assisted him in many capacities, serving as treasurer of the corporation until her death in November 1997. She also raised a family of nine children, all of whom worked in the stores while they were growing up. In addition to his immediate family, Francis also received assistance from his cousin, Frank. J. Ryan of Allegany, who served as vice president of the corporation, and his close friend, Harry M. Pike, who was secretary and office manager. Long-time friend and manager of the Front Street store, Marty Ruth, later became vice president. Marty and his wife Ann both served the company for almost sixty years, and their friendly, familiar faces were well known to generations of Boardmanville shoppers.

Active in the business until his death in 1980, Francis Mahar’s legacy was carried on by five members of the second generation, all of whom had worked in the stores since childhood. Francis (d. 2015), James, Paul, Thomas, and Daniel (d. 2001), continued the tradition of service inherited from their father. This legacy continues today as several third-generation family members are also involved in the family business. Although many changes have occurred in the grocery industry since Francis Mahar, Sr. founded the first Service Store, his family has continually carried on his underlying principle of service.

Over the years, the warehouse business was phased out and today the corporation is a member of the Olean Wholesale Grocery Co-Op. There are now three modern supermarkets in Olean and Portville. The corporate offices are now located on Thirteenth Street, in a remodeled building near the store at Thirteenth and West State Streets. Just as the world of 1923 was a far cry from the world today, so have the small neighborhood groceries evolved into modern, computerized businesses with large delis providing carry-out meals, a web site and updated blog with weekly specials, an internet newsletter, and many other additions never envisioned in 1923.

Francis Mahar Sr. first started a small grocery story emphasizing service, and this spirit lives on today. His family, friends, employees and customers owe much to the eighteen-year-old Market Basket worker who wanted to start his own store and who went on to leave a twenty-first century supermarket chain as his legacy.